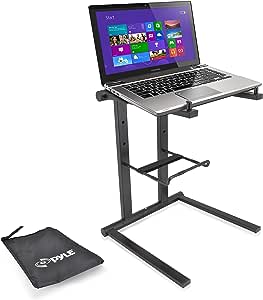 Your question might be answered by sellers, manufacturers or customers who bought this product.

Please make sure that you've entered a valid question. You can edit your question or post anyway.

This universal portable foldable DJ laptop stand perfectly fits in backpack or handy carrying bag included on this item. Manufactured for use in home, studio or on the road trip. The double peg holding tray of this professional DJ laptop stand keeps laptop secure in demanding environments. Just Slide in the sturdy steel rod accessory tray and it is ready to use. Folding instructions of this portable folding laptop stand are included. This light weight sturdy standing table with foldable height and secondary accessory tray unit is only 3.3 pounds.

Deals related to this item

3.6 out of 5 stars
3.6 out of 5
2 customer ratings
How are ratings calculated?
To calculate the overall star rating and percentage breakdown by star, we do not use a simple average. Instead, our system considers things like how recent a review is and if the reviewer bought the item on Amazon. It also analyses reviews to verify trustworthiness.

Share your thoughts with other customers
Write a customer review

a customer
5.0 out of 5 stars Excellent Stand
27 March 2021
Style Name: Dual ArmsVerified Purchase
The product is very sturdy and infinitely adjustable in terms of height.
Virtually the entire product is made of metal and there is very little plastic.
However owing to the limited space between the trays and the poles, accommodating a larger laptop (15" or larger in display size) may be problematic.
The trays are similarly adjustable in terms of depth, width, and angle, and this adjustability may be harnessed in case the laptop's ports are blocked by the pole at a certain depth setting.
Read more
Helpful
Report abuse
There is 1 customer review and 2 customer ratings.
See all 1 customer reviews
Write a customer review

Most helpful customer reviews on Amazon.com

Justin H
2.0 out of 5 stars Wobbly & unsafe
1 August 2018 - Published on Amazon.com
Style Name: FoldingVerified Purchase
Like others have said, this stand is incredibly wobbly (front to back --- see my video). I'm using the foldable stand that has the 2 vertical bars. I like that this stand folds flat, but it was not engineered well. Once snapped/"locked" in place, the stand will rock a few inches front to back. This is unacceptable, and is a real problem if you are a DJ using this at a gig. Not only should you not trust your laptop/equipment on this stand, but it's potentially unsafe as it could easily fall on someone during a gig.

Although I love the height and look of this stand, I cannot recommend it to anyone. It can be fixed so that it will not flex, but that requires drilling and modifications that would mean that it's no longer foldable/portable (see another reviewers post about this). This is a shame, because it would be incredibly easy for Pyle to make this a great laptop stand, but they dropped the ball.
Read more
21 people found this helpful

Kevin K.
4.0 out of 5 stars Great, with an easy modification...
19 May 2019 - Published on Amazon.com
Style Name: FoldingVerified Purchase
Bought this planning on using it for my live performances abroad. It is durable, heavy duty and does fold flat. The audio interface tray is a great touch and I'll probably continue to use this in the studio for my second computer. However, as some reviewers have mentioned-it can come slightly out of 'true' and come to you wobbly. I bought mine used, but took very heavy gaffer's tape, and the remnants of a cut-up plastic gift card to even out the legs. What this offered me was a stand that now is super-sturdy, and customized (for me). If you're not willing to alter/work with things you buy cheap, there are certainly other options that are twice and 3 times more that you can buy . This one works, especially if you take the time to measure the difference and make a wedge. It works for me, so I'll keep it.
Read more
7 people found this helpful

Tony A
5.0 out of 5 stars Foldable/Adjustable+ 15”MacBook Pro+ Serato DDJ= Perfection!
12 July 2020 - Published on Amazon.com
Verified Purchase
I was worried when I noticed a fellow reviewer showing their wobbly stand after I had made my purchase.

Fortunately the “Portable, Adjustable “ version is built like a tank. My 13” MacBook Pro fits like a glove, my 15 “ MacBook Pro over hangs 1/2”, but it’s not going anywhere.

There is zero chance the 15” MacBook Pro will fall out while adjusting the screen( providing the bottom of the stand is under a full sized controller or especially if it’s tucked under a DJ coffin), I don’t think this version is meant to stand on its own, my gigs are around drunk people, so I wouldn’t take that chance anyway.

The stand is really solid with my DDJ anchoring it, but I’m actually planning on using the stand mainly anchored under my SKB full roller coffin, mounted with two Technics turntables, four channel Pioneer Mixer, and a custom laptop mount, a tornado isn’t moving that thing.

I’m planning on using this mount on for my second MacBook Pro that I use for projecting media.

Even before the mount arrived I was planning on taking an angel grinder to the front little fingers and removing a half inch.

Even after shortening the front finger things, the plastic bumpers have a nice grip, I just epoxied the bumpers to avoid loosing them at a gig.

I’m so impressed with this stand that I might get another one to hold my DDJ, to be able to swivel it out of the way when I don’t need it, since it’s not my primary device.

That’s a project for another day though, I’m going to need to test it out at my next gig.

But ya, this version is solid, it’s actually heavier then what I was expecting.
The version with the bottom shelf is the one that looked like an expensive disaster waiting to happen.

I’m happy with my purchase, I’ll most likely get another one, thank you.
Read more
3 people found this helpful

Däch
4.0 out of 5 stars Not for big laptops
8 June 2015 - Published on Amazon.com
Style Name: FoldingVerified Purchase
I bought this to go with my Envy 17, but it will not work. Enough of the back of the laptop hangs off that I cannot open the lid far enough for me to see the screen without the laptop falling off the back of the stand. I suppose if you have an unusually front-heavy laptop, it might be fine, but I am not comfortable balancing my $800 laptop on something where the slightest nudge or even a breeze could send it tumbling to the ground. If you use a smaller laptop, though, it's a good deal for the price.
Read more

4.0 out of 5 stars Not for big laptops
Reviewed in the United States on 8 June 2015
I bought this to go with my Envy 17, but it will not work. Enough of the back of the laptop hangs off that I cannot open the lid far enough for me to see the screen without the laptop falling off the back of the stand. I suppose if you have an unusually front-heavy laptop, it might be fine, but I am not comfortable balancing my $800 laptop on something where the slightest nudge or even a breeze could send it tumbling to the ground. If you use a smaller laptop, though, it's a good deal for the price.
Images in this review