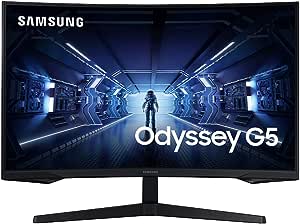 Would you like to tell us about a lower price?

Your question might be answered by sellers, manufacturers or customers who bought this product.

Please make sure that you've entered a valid question. You can edit your question or post anyway.

Introducing the G5 Odyssey’s high performance line-up of Full HD and Quad HD curved gaming monitors. The G5 range hosts a variety of next level performance and visual upgrades at a fantastic price point, allowing gamers to pick and choose the model that’s right for the games they love to play.

Deals related to this item

How are ratings calculated?
To calculate the overall star rating and percentage breakdown by star, we do not use a simple average. Instead, our system considers things like how recent a review is and if the reviewer bought the item on Amazon. It also analyses reviews to verify trustworthiness.

Share your thoughts with other customers
Write a customer review

Most helpful customer reviews on Amazon.com

DonVitoT33X
2.0 out of 5 stars The Review I wish I read before ordering...
7 October 2020 - Published on Amazon.com
Verified Purchase
First let's list the positives:

-The curve! That curve is absolutely fantastic and will make it hard to go back to any flat screen in my opinion.

-Size! 27 or 32 inches is perfect for any 1 person gaming setup. (I have the 27 inch and its perfect, especially with that curve)

-Freesync (Gsync maybe)! Been using this on my Xbox, Freesync works no problem.

-144hz. Can't test this as my Xbox only goes to 60hz, but I'm sure it would have worked well with my Series X.

-Deep blacks and great "picture" quality. Picture is in quotes for a reason ill get to in a sec. Blacks are inky and contrast is good for a $300 monitor. VA dark room performance is better than IPS panels as expected.

The above all sounds good right? It checks all the right feature boxes, and sounds like the perfect $300 monitor right? Sadly, wrong! For really only one reason listed below.

-GHOSTING!!!!! The response time is AWFUL! Everything in motion smears! Hence the "picture" in quotes above. The screen looks great when a static image is displayed, but the second things are in motion its a smudgey mess. Instantly noticeable over my IPS 75hz Freesync panel. Absolutely disgraceful! There is no reason to own a monitor with such great features and high refresh rate when the ghosting is going to ruin any of those benefits.

Obviously, I would not recommend this monitor to anyone looking for picture quality or competitive edge. The 1 con far outweighs all of this monitors pros, unfortunately. Unless you're shelling out for a Samsung G7 monitor, I would steer clear of monitors with VA panels as well.
Read more
458 people found this helpful

Customer RK
4.0 out of 5 stars WOW.... but....
21 July 2020 - Published on Amazon.com
Verified Purchase
okay, first off playing this monitor with a 2080 ti. this thing is fast, so fast that the 2080 ti cant push it to the limit like 99% of the time, which was what i was looking for in a monitor. over all this thing is fantastic. it looks sharp, the curve is very noticeable unlike other monitors that i have owned in the past. it really dose feel like you are more in the screen then anything i have messed with before. honestly i would have given it a 5 star for the tech that is in the monitor...... BUT i dont like the stand that its on, and i really dont understand the LED on the back or on the bottom of the monitor. the stand shakes and you notice your monitor wobble, which honestly is annoying me being that this is a pretty spending monitor, and for the RGB LED, you just cant see them. theres no reason to be there. other then for maybe others to see, which i think is strange. If i could gives some tips, take the RGB off and give me a better stand for the same amount of money, cause at this point i might have to get a new stand for it and that part kinda sucks.

Update: 7/25/2020
after trying a lot of games on this monitor I still Love it. the colors on this monitor are amazing, and the shadowing in games looks perfect. Now i will say i dont use the g-sync because of 2 reason, the first i dont like it cause i get some weird screen flickering that i mostly see in weird times like loading screens and such. which annoys me enough that i dont want to even try to use it. and the second reason is it cuts the refresh down to 144, which i also really dont like. the screen still shakes on my desk, and im still looking for a solution to this. it honestly is very noticeable with such a large monitor. but if you want a monitor that looks as good if not better then an IPS monitor with color, and you want 240hz and you want the fast response time. this really is the monitor to go for. BUT..... the little issues that im talking about i really had to put it to the test. if you open the box then set it up, set it to 240 and then put it on faster response, it will for sure blow your mind. at least it did for me, and the runs amazing with my 2080 TI. :)
Read more
160 people found this helpful

Colin
1.0 out of 5 stars Dead pixel, nothing else matters
17 July 2020 - Published on Amazon.com
Verified Purchase
Turned it on to find a dead pixel. No matter how great a monitor might be, a single dead pixel makes it worthless.
Read more
162 people found this helpful

Jason Dylan
1.0 out of 5 stars Horrible Ghosting and Motion Blur, HDR Poor. Returned
7 October 2020 - Published on Amazon.com
Size Name: 32"Style Name: QHD, 144HzVerified Purchase
I bought this in Sept 2020 prior to any reviews being posted.

I honestly expected more from Samsung, but this monitor was the worst I've ever owned. Whenever you scroll, everything dark or black leaves trails. You don't even need to scroll fast. This is especially bad with dark sites/programs such as Steam, and normal white pages with text. I've never owned a monitor that has been that bad. Even the 144hz line on testufo/blur busters had horrible blur to it. That doesn't happen on my other monitors. I tried a different DP cable and moving the port on my GPU, no fix.

Also, the HDR isn't good on this monitor. Turning it on makes everything kind of warm. It makes it look like you have the blue light filter turned on. Everything (especially whites) have a kind of reddish hue. It also causes all Windows text to look broken up and fuzzy. Running ClearText doesn't fix this. You can turn up the HDR brightness in Windows Color which helps with the reddish hue but makes the text and everything else look worse. Turning HDR off makes everything look "normal" again, but at the cost of no HDR.

The monitor also has a fair amount of backlight bleed. Not the worst I've had with a monitor, but enough to notice.

I will say that I don't care for the extreme curvature either. That may be a personal preference sort of thing, but it took about a week to get used to it. Even then I found it to be a hindrance in anything but games. Doing any kind of photo or video editing with that high of a curvature was a bit of a pain due to things sort of looking stretched as you moved out towards the edges. I think a high curvature like this would be good if the monitor was much bigger (like their 49" one), but a 32" is too small to be that curved. I have an AOC monitor with a slight curve to it which is nice. Also, the extreme curve of the Samsung monitor causes it to be really deep. So whether you're having it sit on your desk or using a VESA mount, it sits MUCH closer to you than a flat or slightly curved monitor due to the extra few inches of thickness.

I finally returned this today after owning for about two weeks. No amount of messing with the settings could fix this, so I've bought a different brand of monitor which (when it gets here) I hope will be better. Maybe I just got a bad one, but as it stands, I couldn't recommend this to anyone. It's inexpensive, but it's also "cheap". You're going to have a monitor for awhile, so spend a little extra to make sure you get a good one.
Read more
111 people found this helpful
Go to Amazon.com to see all 479 reviews 3.9 out of 5 stars
Back to top
Get to Know Us
Connect with Us
Make Money with Us
Let Us Help You
© 1996-2021, Amazon.com, Inc. or its affiliates